11
09
2016
Welcome to Bayside Hapkido’s September Newsletter. August was a huge month for the school; a visit from GM Booth in Queensland and the opening of a second location.

The 16th of August, 2016 marked a special occasion for Bayside Hapkido with the opening of a second location in Alexandra Hills. The new location in the Hilliard State School Hall is a great opportunity for the school to expand as well as extra training each week under Sir Adam. Students can now train five days a week across the two locations!

The grand opening night started off with SBN Nathan giving a talk to parents about what hapkido is, information about our school and how the kid’s syllabus works. There was then a mixed kid’s seminar followed by the very first formal kid’s class. The adult’s class was also a success.

At the end of the grand opening night, Sir Adam continued tradition passed on by SBN Nathan. He dropped a stone onto the floor of the new school, signifying a stone being dropped in a body of water and the kind of ripple effect this has.

Congratulations to SBN Nathan on the expansion of Bayside Hapkido and to Sir Adam on the beginning of his own location and classes.

When coming to attention, make sure your heels and toes are together!

Margaret McShane is a Scentsy rep and is selling scent packs. They are $15 each and of high quality. For every one sold the school will receive $5. 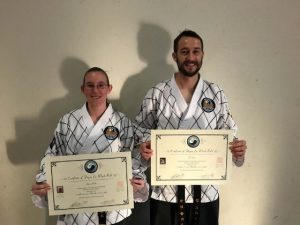 Touted by both SBN Nathan and GM Booth himself as one of the best Queensland trips he has taken, this year’s Grand Master visit didn’t disappoint. The weekend started with SBN Nathan taking GM Booth out for dinner at Aria as a gift from the school. A big thankyou was extended to all those who donated towards the gift.

Next came the kids seminar, where Grand Master imparted some wisdom on our youngest members. No handed techniques and practical street defense were among the many topics GM Booth covered.

After the kids seminar came to a close, there was a special QLD first as GM present CGN Zeb and CGN Alycia with their official Black Belt Certificates. This was the final step in confirming their status as Kwan Nyom Hapkido Black Belts.

Once the formalities were out of the way, the adults completed a packed seminar of reading body language, street psych, one handed techniques, and weapons from everyday objects from earphones to a powerbank just to name a few.

Saturday night was capped off with a group dinner at Sirromet, with surprise service from an ex student (who took a moment to recognize Grand Master) and set the scene for another QLD first…

Sunday marked the first Sun Bae (Senior Belt) training day held in Queensland, with a solid turnout and some priceless opportunities to complete 1-on-1 training with Grand Master – including a rare chance for SBN Nathan to train his own techniques.

It was a fantastic weekend enjoyed by all who attended!

Dates for no classes

September we have been asked not to use the hall for a few lessons due to the school using the hall. These will be the dates:

There will be no classes Tuesday 6th September through to Thursday 8th September. They are also using the hall for end of term events. Though anybody from Victoria Point can train the following week at Hilliards to make up classes.

Member of the Month – Hawks

How long have you being doing Hapkido? – 4 years

What do you like best about Hapkido? – the hapkido family

What is your favourite technique? – turning kick

What are your goals for Hapkido? – to finish all hawks and falcons belts

Member of the Month – Falcons

How long have you being doing Hapkido? 5 years

What is your favourite technique? Turning side fall

What are your goals for Hapkido? To become a black belt

Tell us something that you like to do outside of Hapkido Swimming, soccer, touch football, tumbling, motorbikes and golf.

Member of the Month – Adults

How long have you been doing Hapkido for and what belt are you? I started Hapkido in late 2012 so I’ve been doing it for 4 years now and I am currently up to red belt.

What made you join up and what do you like about Hapkido? Well, my mum actually signed me up without telling me until that afternoon, but what kept me coming back was the friendly community. I like that with hapkido we don’t focus just on strikes or kicks or locks, and instead try everything, even ground defence.

Which grade are you in at school? I am currently in grade 11 at Redlands College.

What do you do outside of class and in your spare time? Outside of class I do Hapkido training (like everyone should) but I also do some reading, gaming, and recently I have become interested in photorealistic 3D CG animation, so I am also learning the programs people use for that in my spare time.

Congratulations to the kids who graded on the 31st of August.